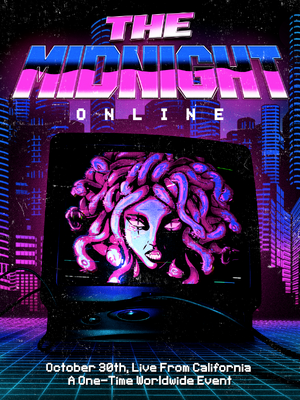 Poster for the online show

The Midnight Online was a concert special by The Midnight. A one-time-only event, the concert was broadcast live on Seated from the Libbey Bowl in Ojai, California on the evening of October 30, 2020.[1] A repeat broadcast was streamed the following day to accommodate international audiences.

The effects of the COVID-19 pandemic disrupted The Midnight's plans to tour and promote their new album, Monsters. To get fans engaged with the band during the pandemic, an alternate reality game (ARG) began on September 24, 2020, and continued through October 15, 2020, with fans working together each day remotely to solve clues and discover hidden prizes. The ARG's prize on the day of October 8 was a poster advertising The Midnight Online, described as a "One-Time Worldwide Event" to occur on October 30, live from California. Later that same day, the concert was announced to the public and tickets went on sale.[2][3][4]

Promotional video for the liveshow

The Midnight, the duo of producer Tim McEwan and singer-songwriter Tyler Lyle, are masters of flipping the disparate archetypes of yearning American youth — think everything from John Hughes films and the Smashing Pumpkins’ “1979” music video to Snapchats of ravers losing it to a big bass drop and the lonesome sway of the “lofi hip hop radio-beats to study / relax to” YouTube channel — into their own modern collage that finds a through-line between generations of teenage ennui.

//The Midnight have partnered with the PLUS1 Covid-19 Relief Fund to support Backline and their work with those in the music industry whose mental health, safety, and wellbeing are some of the most at risk to the impacts of the pandemic. $1 contribution from every ticket will be directed to this important cause. Thanks for your support. www.covidrelief.plus1.org //