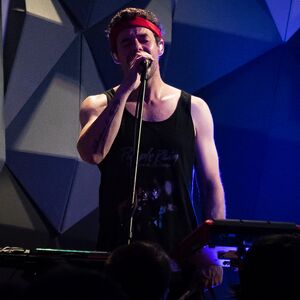 Tim performing live with The Midnight

Tim McEwan (born September 16, 1979) is a Danish drummer, songwriter, and producer. He is the primary producer and songwriter of The Midnight.

McEwan grew up in a musical family and started drumming at a young age. Around the age of 17, he began producing and did a few productions in his native Denmark. In 2008, he joined the Danish production group Deekay and began writing and producing for many popular artists.[1][2]

In 2012, McEwan met Tyler Lyle at a songwriting workshop in Los Angeles. The two made an instant connection and began writing songs. McEwan and Lyle formed The Midnight and self-released their first extended play (EP) in 2014 and have continuously released music since.

Tim Daniel McEwan was born in Copenhagen, Denmark to Tom McEwan and Terese Damsholt. His father is an actor and musician and his mother is an actress. He has a brother, Oliver, who is also a musician. Being the son of a musician, McEwan was exposed to music from a young age, having access to a guitar, drum, and piano at home growing up. He started playing the drums as an adolescent and began producing at the age of 17.[3]

Throughout the early 2000s, McEwan produced a few songs and did some remixes.[4] He gained higher prominence in 2008, writing and producing several songs for the Danish singer Martin's (winner of The X-Factor) debut album, Show the World.[5] Also in 2008, McEwan became a member of the production/songwriting team Deekay,[1][2] a Danish-based outfit that has written and produced songs for many popular artists including Jordin Sparks, Sugababes, JLS, and New Kids on the Block.[6] In 2009, McEwan served as the drummer for Niels Brinck, who performed the song Believe Again as part of Denmark’s entry to that year’s Eurovision Song Contest. The song made the contest final where it finished in 13th place.[7]

Still residing in Denmark, McEwan visited Los Angeles in 2012 and met Georgia based singer-songwriter Tyler Lyle at a songwriter’s workshop in North Hollywood organized by Katie Donovan, Lyle’s A&R representative at the time.[9] Prior to meeting, McEwan had listened to some of Lyle’s previous work and liked Lyle’s folk sound. The two began writing songs and on McEwan’s suggestion, based their sound on 80s synth, having prior exposure to the synthwave genre and being inspired by the movie Drive. Their first song written as a duo was WeMoveForward,[9][10] and their first release as a band under The Midnight moniker was the 2014 extended play Days of Thunder. McEwan is the primary producer and songwriter in The Midnight. While Lyle is the primary vocalist and lyricist, McEwan wrote the lyrics and sang the vocals on the songs Synthetic and Comet.