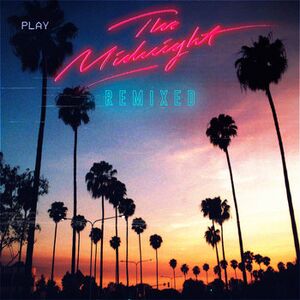 The Midnight Remixed is the first remix album from The Midnight. It was released through the label Monstercat Silk on August 14, 2017.[1] The album contains remixes of songs from Days of Thunder and Endless Summer.

Prior to the release of The Midnight Remixed, Monstercat Silk issued singles for the songs WeMoveForward, Sunset, and Days of Thunder.[2][3][4] These single releases included the original songs as well as their corresponding remixes that would later be included on the album. After the album's release, Synthetic was released as a single by Monstercat Silk, with this single featuring five remixed versions of the song.[5]

The first collaboration between The Midnight and electronic music label Monstercat Silk was the March 2016 release of the single WeMoveForward. This single included the original song, its instrumental version, and a new remix by Talamanca.[6] Another single, Days Of Thunder, was released later that year in August and included the original song and a new remix by PROFF.[7]

On July 24, 2017, a third single from Monstercat Silk, Sunset, was announced.[8] The same day, it was confirmed that a full remix album was coming with a scheduled release date of August 14, and the album art and track list were revealed.[9]

The release was a success for the band and Monstercat Silk, charting at number 22 on the Billboard Dance/Electronic Albums Chart.[10][11] This was the first time a release by The Midnight charted on Billboard.[12] Monstercat Silk followed this up by releasing a fourth and final single on December 18, Synthetic.[13] This single did not include the original song but instead featured five remixed versions of it.