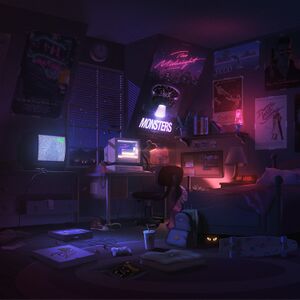 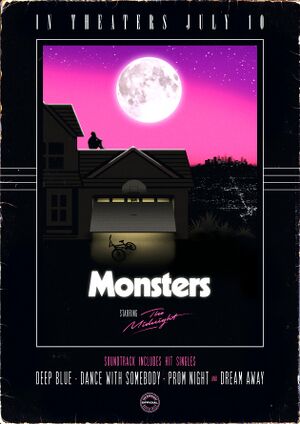 The Midnight's previous album Kids was originally planned to be a larger release with more songs compared to the final product. It was later stated that its production was scaled back so Tyler Lyle would have more time to spend with his newborn child.[7] With the band having a lot of leftover ideas from the making of Kids, they decided to expand upon its themes and began work on a follow-up album as part of a planned trilogy.[8][7][9]

Some of the prizes given during the Fall 2020 alternate reality game (ARG) have revealed details about the development of Monsters. It had a working title of Kids 2 and several early demos of songs that appeared on Monsters were also shared. A snippet of America Online was shared on the band's social media in April 2018, predating the release of Kids.[10] An early instrumental snippet of the song Monsters included in the ARG prizes is named "Monsters (early instrumental demo for KIDS)", indicating that it was also initially planned to be included on Kids.

In February 2019, it was mentioned on the band's social media that new songs were being recorded in Atlanta (the home of Lyle).[11] On March 20, a no-captioned photo of an America Online startup screen was posted, the first official mention of the song since the April 2018 snippet.[12] On March 25, a new clip of America Online containing vocals was shared.[13] On April 5, a photo showing an America Online branded floppy disk with a caption of "New single dropping soon" was posted.[14] A tiny portion of the single artwork was shared on April 18,[15] followed by another small portion on April 29, with a release date of May 3 being announced.[16] The next day, the single was officially confirmed to be America Online.[17] The full single artwork was revealed on May 2.[18] The artwork showed a computer with an AIM-esque chat interface, along with a desktop showing a file called "Monsters.zip", which would later turn out to be the name of the album. On May 6, the band's Twitter account posted the single artwork and stated that the font used in it was the name of a track from the upcoming album.[19] A June 4 post showed an old System 7 interface with a text editor open and the font Helvetica selected, confirming the aforementioned song's name.[20]

Further sharing of information about the next album was infrequent for the remainder of 2019, largely due to the band's ongoing tour. During the tour, a few songs confirmed by the band to be on the pending album were performed, including Seventeen, Monsters, and Brooklyn. The band shared in October that the next album would have a song "that feels like the spiritual successor to Lost Boy"[21], and also stated in December that the album has "taken a lot of inspiration from world music."[22]

In January 2020, the band said that "there may or may not be an homage to Ecco the Dolphin on our upcoming album."[23] It was mentioned in February that the new album would have pan flute and saxophone,[24] and it was also confirmed for a 2020 release.[25] On April 24, a new snippet of the next single cover was posted on social media. On April 27, the single was confirmed to be Deep Blue with a release date of May 6. A short instrumental clip of the song was included in the post. The full single artwork was revealed on May 3.[26] On May 6, the release of Deep Blue was accompanied by the announcing of Monsters as the next The Midnight album, with a planned release date of July 10.[27] The artwork and tracklist were also revealed.

On May 29, Dance With Somebody was announced as the third single from Monsters alongside a short snippet of the song and a release date of June 3.[28] However, The Midnight announced on June 1 that the single's release would be delayed a week to June 10, with the postponement being done in solidarity with racial justice protests happening at the time in the US.[29] Prom Night was revealed to be the album's fourth and final single on June 18, with a short snippet and a release date of June 24 being shared.[30]

Monsters was officially released on July 10, 2020. Receiving mostly positive reviews, critics noted that the album moved the band's sound in a different direction and expanded its horizons, breaking the traditional mold of the synthwave genre.[31][32][33][34][35] The album was also the biggest commercial success to date for The Midnight, charting at number one-hundred-thirty-four on the Billboard 200,[36] number twelve on the Dance/Electronic Albums chart,[37][38] and number eighteen on the Independent Albums chart.[39]

According to Tyler Lyle, a few that songs were written or sketched during the creation of Kids were held over for Monsters.[40] He also noted that the production of Monsters took longer than previous releases due to the band's tour schedule.[7][41][42] Monsters was released with fifteen tracks, the largest number to date on a The Midnight release. The title track is a collaboration with Jupiter Winter, a music duo consisting of Lelia Broussard and Royce Whittaker. Broussard co-wrote the track and sings vocals on the second verse. She had previously joined the band as a guitarist and backup vocalist during the Fall 2019 Tour. Broussard and Whittaker would both join The Midnight for the concert special The Midnight Online. Brooklyn, the album's eleventh track, was originally a solo song by Lyle from his album The Floating Years.[43]

A continuation of Kids,[44][45] the album explores the trials and tribulations of growing up as a teenager and young adult. McEwan noted that the songs on Monsters "range from calm to sad to aggressive, and reflect[s] some of the internal struggles of adolescence."[46] When asked about the significance of 1991, McEwan opined: "The KIDS have grown up. They're teens now. And 1991 was the year the internet went live. Hence the modem sound and opening the album with America Online."[47] Lyle has described Monsters as "an examination of the half in darkness, half in lightness war of individualization through adolescence."[48] During an interview with Icon Vs. Icon, he said about the album:[49]

We wanted MONSTERS to be about adolescence, where the adult world starts knocking on your door and you have to face questions about intimacy, closeness and alienation. It’s a continuation of KIDS in a lot of ways. We wrote a lot of songs for it and hopefully we have a lot of songs for the next record as well to complete the arc. This collection we really felt spoke to the theme of connection.

Monsters has been noted for having a new and different overall sound compared to previous releases by The Midnight. Tim McEwan said a goal with Monsters was to "broaden the palette a bit and sonically evolve the sound of not just us but what is allowed in synthwave and question what is synthwave" and also to not be "encumbered by rules of a genre."[49][50] McEwan elaborated further stating "I think there's a tendency with all genres to be bubbled into this chamber of one specific genre, and I felt it was important for us to move forward and to have the ability to move freely."[51] Tyler Lyle said with regards to Monsters that McEwan "is evolving the sound a little bit more" and that "We’re opening the palette a little bit more — in some ways becoming a little bit more acoustic and in other ways becoming more dance-focused in different areas.”[52] During a fan question-and-answer session on Twitter prior to the release of Monsters, he mentioned that he "wrote about 250 songs between 2016-2019" and "20 something of those songs got properly demoed/ realistically considered for Monsters."[53]

McEwan stated that he took inspiration from various genres including soft rock, lo-fi hip-hop, and trance. Influences of vaporwave can also be heard on tracks like America Online and City Dreams (Interlude).[54] The song Dream Away is mentioned by McEwan as being a "homage to the 90s wave of world influenced electronic music like Deep Forest and Engima."[55] Lyle said that his work on Monsters was inspired by a string of Bruce Springsteen albums from the late 1970s to early 1980s, with the song Prom Night regarded as "an openhearted nod to Springsteen's gift as a dark and complicated writer who could also write a full throated pop song without those two words seeming to contradict."[56] Lyle's vocals are supplemented with vocoder effects on the songs Monsters, Fire In The Sky, America Online, Deep Blue, and Night Skies, with the effect heard on Fire In The Sky actually being McEwan's voice.[57]

Additional instrumentation was provided by Thomas Edinger (saxophone on Dance With Somebody), Oliver McEwan (synth bass on Dance With Somebody, Bass & fretless bass on Brooklyn), Daniel Heløy Davidsen (Lead guitar solo on Seventeen), Izzy Fontaine (additional guitar and guitar solo on Brooklyn, guitar on Prom Night & Last Train), and Jesse Molloy (saxophone on Deep Blue). The album was mixed by Tim McEwan and mastered by Emily Lazar and Chris Allgood at The Lodge in New York, NY. Songs were recorded in Los Angeles, CA, Atlanta, GA, and the back of a tour bus all over the world.

Artwork and layout by Aaron Campbell.