About The Midnight Wiki 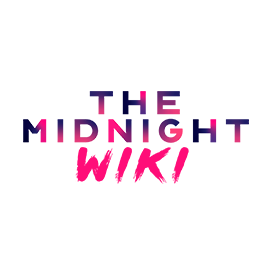 Hello and welcome to The Midnight Wiki! We are a community-ran wiki whose goal is to cover anything and everything related to the American synthwave band The Midnight. Here you will find information about the band, its members Tim McEwan and Tyler Lyle, as well as The Midnight's Releases, Songs, Tours, Lore, and more!

What follows is a brief history of how we came to be. Around September 2020, The Midnight began an online Alternative Reality Game (ARG) that united fans of the band across the world in their efforts to find clues and solve puzzles. To facilitate this, a small group of fans created a Discord server that quickly grew in size and scope beyond the ARG efforts and eventually became the official Discord for all things The Midnight.

Towards the end of the ARG in October, several members of the Discord server had an idea to create a website dedicated to lore and in-universe themes relating to The Midnight. It was eventually decided that the best direction to take was to make a wiki site. Work began and continued for about a month before The Midnight Wiki officially launched on November 16, 2020.

During the development phase, a call was made to all fans to submit photos and videos they had captured of the band during their tours to give us a supply of free-use images to use on the articles. The response was extremely positive and many submissions were received. In addition to using these photos on the articles, we also created a special page called Lost Boy's Polaroids to showcase these images as well. This page remains a cornerstone of the wiki and a wonderful representation of the wiki's community driven spirit.

The Midnight Wiki initally ran on the Dokuwiki engine. In March 2022, the wiki began the process of converting to the MediaWiki engine (used by Wikipedia and many others) to take advantage of additional features and benefits that MediaWiki offered compared to Dokuwiki. The Midnight Wiki 2.0 officially launched on April 16, 2022.

We would like to thank the following people for their contributions to The Midnight Wiki - without them, the site wouldn't be where it is today -

If you would like to help contribute to The Midnight Wiki, head over to Getting started.

If you need to contact us, you can do so in the following ways: