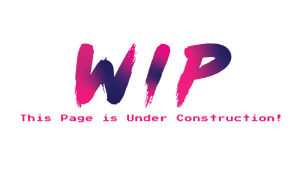 This wiki article is currently being worked on. More info will be added soon.

This is a WIP and timeline of the events surrounding the 1991.txt ARG and is not yet content complete. It's locked so only admins can edit it for this exact reason

The 1991.txt ARG was an Alternative Reality Game created by The Midnight ahead of the release of "Monsters" which ran from September 24th - October 15th 2020.

Set in the universe of the "Kids" trilogy of albums and applying the themes of connection featured heavily throughout "Monsters" the community would collectively need to work together to first trigger the beginning of the ARG and continue to work as a team to progress the narrative featuring a now confirmed character in the Midnightverse & unlocking additional clues and winning prizes.

The first clue was a series of DTMF tones within the opening track 1991 (Intro).

Although there were some early investigations, the ARG wouldn't gain traction until late September after a hint was posted from the band's main Twitter account.

Speculation about something being hidden within the launch of "Monsters" started as soon as July 14th with the opening track 1991 (Intro). A Twitter user simply tweeting the band account a sequence of numbers with no explanation as to how they came across this.

A day later another Twitter user who suspected something to be hidden within 1991 (Intro) came forward with a detailed approach to the dial-up tone sounds and a method of decoding the DTMF tones in order to return the numerical value of 183010165. 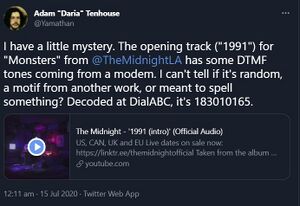 Utilising a DTMF detector web app, it was possible to cut the dialup tone section of 1991 (Intro) and upload it - which would return the numerical value. The thread continued for a couple more tweets, even as far as tagging the band to gauge if this was legitimate or not however there was no response and no further investigations were carried out.

Two months after the release of Monsters it appeared that interest surrounding the dialup tone of 1991 (Intro) had faded until 12:32am on September 24th, Tim tweeted out from the band's official account an image of a set of the coasters sent out with the Monsters ultimate bundle, asking "So, we are wondering if anyone has found this floppy disk yet?" the front disc resembles the same "Memories" coaster shipped with all orders with the addition of "1991.txt" written on the front with a black marker. Tim would also add "Psst it's in a Pizza Box" confirming that this was indeed real and somebody had the disk.

After this tweet, it was clear that the Band were hinting to something bigger and staying true to the themes of connection within "Monsters" wanted the fans to work together to track down the lucky individual who had been sent the 1991 Floppy.

Tyler would proceed to share a couple more hints to reassure those following the thread to not be disheartened after everyone checked their own Pizza Box coasters. The hunt was on.

In order to get the word out, IAreLucas began tweeting every single act that appeared in the one beating heart stream to see if they would RT and therefore expose the hunt for the 1991 Floppy Disk to more followers & fans.

On the 25th September, a Twitter account with the handle BlondeNinja came forward as being in possession of the 1991.txt floppy - who had also managed to lcoate a USB Floppy disc reader and extracted a single low-quality image containing the following clue:

Following the discovery of the Floppy Disk, at 4:26pm BST “The Midnight ARG: 1991.txt” Discord was created. Communications then switched between the two platforms with most people who were following the developments joining the Discord.

The main hints given were directed towards the first track from Monsters - 1991 (Intro), with the excitement surrounding a potential ARG numerous tools and tactics were applied to the intro track including spectrographs and the revisiting of utilising DTMF tone conversion which yielded the exact same sequence of numbers that previous Twitter users had discovered shortly after Monsters’ release.

As the Discord server continued to grow during this phase of the puzzle-solving, two accounts with usernames resembling that of TIm & Tyler joined the Discord, and remained silent with no verification if these accounts were, in fact, Tim & Tyler.

Focus shifted to the sounds of the keystrokes after the modem dialup tone, with some members attempting to identify how many keys were being typed in case this could have been a clue. One member suggested the keystrokes could possibly be a username and login for "AOL" linking this to the second track on Monsters "America Online" coupled with the username found on the single Artwork "lost_boy84" was decided as a potential clue.

Surprisingly, an AOL account was located with many suggestions at what the password could be such as "Memories." After attempts at Brute forcing this event would mark the confirmed appearance of Tim & Tyler into the Discord server who would assure everyone that no hacking was required to solve this puzzle - therefore verifying that the accounts which joined previously were in fact them.

This quickly diminished with further tweets / likes from Tyler regarding the focus of the modem dialup tone.

The lost boy twitter account was a significant development that contributed to the overall narrative of the developing ARG, even going as far to be confirmed as a real character in the Midnight Universe by the band due to the characters involved in the plot with providing guidance and hints.

It became clear that a brick wall had been hit, the same tactics were evaluated with desperate attempts to link the numbers to "Finding the answer online" until one user Knightfall77, placed the number sequence into a domain format: https://183010165.com/ which yielded a black webpage with a flickering loading bar.

This moment proved significant to the start of the ARG with TIm & Tyler applauding the teamwork displayed by the community plus a response from lsot_boy84 himself confirming that everything that ended to be found and solved was completed while also informing players that the next step began that following week of September 28th. <LOSTBOY CONFIRM TWEET1: https://twitter.com/lost_boy_84/status/1309633585721171968?s=20> <LOSTBOY CONFIRM TWEET2: https://twitter.com/lost_boy_84/status/1309633665928847360?s=20>

At around 11:30 PDT the website which had previously been discovered updated its code and the loading bar reached 20 %. A number of eagle-eyed members particularly Gabe were ready to pick apart the code changes. The most significant change would be the addition of a series of scrambled letters and numbers.

After discovering this, Gabe sprung into action applying common Ciphers to the sequence "S1w7uTZ5U ammil://px" yielding the initial answer of "https://we/.%22

While the main focus laid with decoding the sequence of letters and numbers other members again turned to the AOL account that was discovered which was quickly debunked by the band as not being involved. Attention was returned to the sequence "S1w7uTZ5U" with krstromb asking if a Ceaser Cipher had yet been applied. Tt was clear that what was hidden was a domain which, was revealed to be true after JTyrean linked we.tl as a redirect to the file hosting/sharing platform WeTransnfer.

After connecting the two and placing S1w7uTZ5U into a WeTransfer sharing link ((http://we. tl/t-lZsd7bAG5B) lead to a downloadable ZIP containing a Demo of "Lost Boy" from the album "Kids" and a .txt file reading:

Here’s something to tide you over until we begin.

You’ll have to work together, as a community to solve the quests in front of you. Each step will be worth it, especially the last.

Rules: Share clues and prizes with the community Be respectful, both online and in the real world You will not have to do anything illegal to solve a quest (no hacking!) Have Fun If you get stuck, I will be your guide.

This was a relatively short phase that saw the loading bar on the 183010165.com domain increase by another 10% around 11am PST. Gabe proceeded to inspect the page element and concluded from the loading bar's width that increments of 10% would likely be its loading speed coupled with speculation it could reach 100% that Friday.

Between 9Volt - Jordan, IareLucas & Gabe, the trio discovered that the code being committed for the page was in fact static CSS compared against a static copy taken previously. At this point, Lost Boy had started watching the investigation and decided to stir the pot a little.

Revisiting the code on the webpage, Gabe found an updated comment containing two strings: S1w7uTZ5U & ammil://px, common Ceaser cyphers were swiftly applied to these & the beginning of Phase 2 of the ARG was announced to the server after Tim & Tyler both appeared in the 1991.txt text channel.

Work quickly began on decoding the two clues found in the inspected elements. Gabe concluded that mmil://px decoded to https://we, with the latter half "S1w7uTZ5U" universally considered to be an alphabetical shift and part of another domain. This did not stop members trying to gain access to the previously discovered AOL account with the second part of the clue thinking it was potentially the password.

After around an hour of back and fourth, Captain Vortex applied a 7 letter ceaser shift on the string from the website and recieved:

This would prove to be the final puzzle piece the server needed to finish phase 2 of the ARG with Subpar Dropman linking "we.tl" redirecting to "WeTransfer" a file-sharing website. Gabe came back with the completed link of http://we. tl/t-lZsd7bAG5B which awarded the prize of an alternative demo of "Lost Boy". The demo was created in April of 2018. 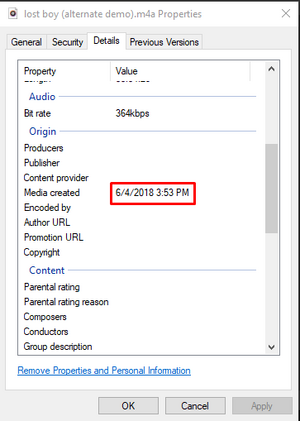 The completion of Phase 2 was signalled by Tyler, who at this point alluded to more things to come as it became clear the community was ready for a challenge. Lost Boy also made an appearance to conclude the day's events. Little did we all know a challenge, with memories to last a lifetime laid ahead. This was the point when the involvement & dedication began to blur the realities of the real world and the online.