This article is about the album. For the song, see Nocturnal (song). 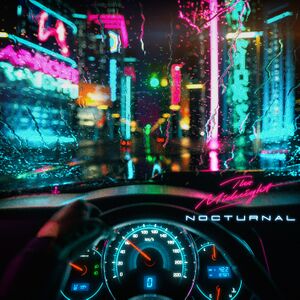 Nocturnal is the second album from The Midnight. It was released independently by the band on October 13, 2017.[1] The instrumental version of the album was released on December 15, 2017.[2]

One single was released from Nocturnal prior to the album's release: Crystalline, which was released on September 22, 2017.[3]

The first hint of new music from The Midnight after the August 2016 release of Endless Summer was a snippet Tim McEwan posted to social media in December that same year.[4] The snippet had a title of Comet and featured McEwan as the vocalist, which would have been the first time since Synthetic that a song with his vocals was on a The Midnight release. Ultimately, Comet did not end up making the then-unknown album but was promised by McEwan to be released one day. The song was eventually included on the 5 Year Anniversary Edition reissue of Endless Summer.

In February 2017, a video of Nikki Flores singing to an unidentified song (which would turn out to be Light Years) was shared by the band.[5] McEwan shared in early March that he was en route to New York City to write new songs with Tyler Lyle.[6] The same week, McEwan said that there were some "moody vibes in the studio right now."[7] Also in March, it was posted on social media that a song titled Maniac Cop was being worked on, but no snippet was shared.[8] As no song on Nocturnal has that name, it is not known if the title was later changed or if the song was cut from the album. In late March, continuing production of new material was hinted at with McEwan posting that he was "struggling with the ever elusive kick drum."[9]

More information about new songs and a new album continued to be shared over the first half of 2017. In April, the band shared that the next album "will have a slightly darker tone"[10] and also shared a snippet of a song presumably titled Lone Wolf.[11] This particular song did not make the album but was later confirmed by McEwan to appear on a future album instead.[12] A clip of Collateral was posted in early May.[13] In June, McEwan shared that he was "going through guitar takes for one of our new songs" and further stated that "the lead sound is SO PERFECT. Very "In The Air Tonight.""[14] In June, the band shared that "there's a track on the new album that'll make your nose bleed."[15] Lyrics from what would end up being the song Crystalline were posted in early July.[16]

On August 9, 2017, The Midnight officially confirmed that a new EP (later regarded as an album) was being released on October 13.[17] About a week later, an upcoming single titled Crystalline was teased and was referred to as a song that "will set the tone for the new EP."[18] Later in August, a clip of Tokyo Night Train was shared. On August 23, the EP's title of Nocturnal was announced alongside a snippet of the title track.[19] A few days later, the artwork for Nocturnal was teased with McEwan saying "if you like movies like Drive, Blade Runner, Thief, Manhunter and The Terminator then you going to love the artwork for Nocturnal."[20] The band said in early September that the new EP "will be slightly more introvert" and "less concerned about big hooks and more about creating mood and vibe."[21] A short clip of Crystalline was shared on September 9 and the single was said to be "coming soon."[22] On September 13, the band said they were "putting the finishing touches to the mix of our first single Crystalline."[23] Two days later, the band referred to Crystalline as being "different, yet still familiar" and stated that they "went off book a little bit" with the song.[24] Another snippet of Crystalline was shared on September 18 and a release date of September 22 was announced.[25] The single artwork was revealed on September 21.[26]

After the single release, more new lyrics (this time from Shadows) were posted towards the end of September.[27] It was also shared in another post that a track from Nocturnal would have a solo "that is a straight up homage to Whitesnake's Is This Love."[28] During an interview with LA Music Blog on the release day of Crystalline, McEwan said the following about Nocturnal:[29]

It’ll be more in line with “Vampires” or another track called “Equalizer”. What inspires me is usually movies. The aesthetic I’m going for with this new EP is more older Michael Mann movies like Thief and Heat or James Cameron’s The Terminator from 1984. That kind of nighttime, Los Angeles, cruising around the city, streetlights, neon, maybe a little bit of rain coming down the windscreen. It’ll have more moody, cooler vibe. It’ll be less John Hughes and more Miami Vice at night.

Two days after release, Nocturnal was the top-selling release on Bandcamp and it remained in the top spot for over a week.[36][37][38] The album charted at number seventeen on the Billboard Dance/Electronic Albums Chart after release and the following year it peaked at number seventeen on the Billboard Heatseekers Album chart.[39][40] Nocturnal received mainly positive reviews from critics, who noted the darker and more mature sound compared to Days of Thunder and Endless Summer.[41][42][43][44][45] It was chosen by NewRetroWave as their top EP of 2017.[46]

Nocturnal contains seven tracks, but there was originally planned to be more, with the band deciding to cut several songs that didn't fit the overall theme of the album.[47] Lyle initially envisioned the album as a "full Halloween/October release that was bit darker than the usual The Midnight fare." The band said they were inspired by several noir themed shows and films, including Stranger Things, The Terminator, and the movies created by John Carpenter.

Nocturnal sees The Midnight collaborating again with Nikki Flores on the song Light Years. Flores co-wrote the song and provides vocals to accompany those of Lyle. She previously worked with the band on the song Jason from Endless Summer. Additionally, The Midnight also collaborated with popular synthwave artist Timecop1983 on the track River of Darkness.

The album was mixed by Tim McEwan and mastered by Anders Schumann.