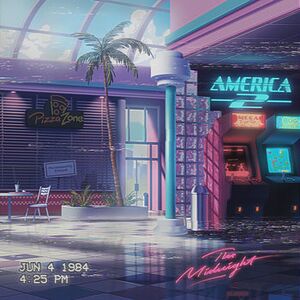 America 2[1] is a song by The Midnight. It is the second single and seventh track from their album Kids. The single was released on August 3, 2018.[2]

The song was written by band members Tim McEwan and Tyler Lyle and produced by McEwan. It has a running time of four minutes and one second and is in the key of B-flat major.

The line "I've come to look for America too" is an interpolation of the line "I've gone to look for America" from the song America by Simon & Garfunkel - Lyle wrote America 2 as a response to that song from a pessimist's point of view.[3] Additionally, the date on the single artwork, June 4, 1984, is a reference to the release of the Bruce Springsteen album Born in the U.S.A..

An early demo of America 2 was released as a prize during the Fall 2020 ARG. Titled America 2 Demo, it is a stripped-down, acoustic version of the song that has no instrumentation other than Tyler Lyle's vocals and guitar. It was originally released as part of an episode from Lyle's podcast From The Secret Lair.[4]

I made my home in a ten-ton bomb
And I was so happy with 28 years of free fallin’
But now it’s all guts and I’m bawlin'
She was born in a tenement walk-up
With shit for nerves, you know she never learned to talk to adults
She said ‘everything's easier in here’

Like the dancer with bruises who gathers the cash
When the music is through, no she don’t look back
I’ve come to look for America too

All I ever wanted was a spot in the mountains
With an a-frame cabin and nobody counting our days
Or cursing or praising our name
But the best we could do is to enter the void
Like a wide-eyed child waking up to the noise of East Harlem
Don’t they see that we’re starving?