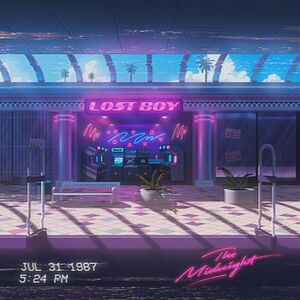 Lost Boy[1] is a song by The Midnight. It is the first single and fourth track from their album Kids. The single was released on July 13, 2018.[1]

The song was written by band members Tim McEwan and Tyler Lyle alongside Lenno Linjama and produced by McEwan. It has a running time of four minutes and thirty-seven seconds and is in the key of F-sharp major.

The date on the single artwork for Lost Boy is July 31, 1987, which is when the movie The Lost Boys was released in theaters in the United States.

An early demo of Lost Boy was released as a prize during the Fall 2020 alternate reality game (ARG). Titled Lost Boy v2 (80%), the song is close to its final form, with the overall structure and sound being similar to the final. The main difference is slight changes in instrumentation, which are most notably heard in the chorus and second verse. The chorus is also slightly slower, and there is not a guitar solo prior to the final chorus. All of the vocals are present and are unchanged in the final version. Of all the demos that were released during the ARG, this is one of the most "complete" and could be described as an alternate take.

We were the monsters and fire-breathers
We were the quiet sunrise leavers
You were a good girl, what could I do?
I was a lost boy when I met you

We were the rebels, lone survivors
We were the cult of deep sea divers
We were young once then we grew old
We were shining, we were fool's gold