This article is about the album. For the song, see Endless Summer (song). 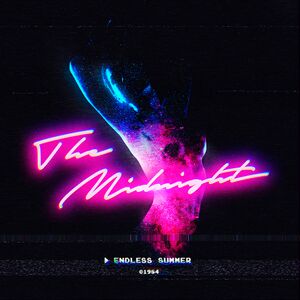 Endless Summer is the first album from The Midnight. It was released independently by the band on August 5, 2016.[1] The instrumental version of the album was released on August 13, 2016.[2]

On June 24, 2021, a 5 Year Anniversary Edition reissue of Endless Summer was released, containing two additional songs not included in the original release.[5]

Endless Summer is the first full-length album from The Midnight, arriving two years after the band's debut EP Days of Thunder. The band announced on social media in January 2015 that new material was being worked on, and a clip of what would become the song Endless Summer was posted.[6] Previews of new songs continued to be shared over the remainder of the year. In February, Tim McEwan posted a photo of himself and Tyler Lyle in the studio,[7] and an early snippet of Vampires was shared on the same day.[8] In March, early clips of Sunset and Daytona (then titled Daytona Beach) were shared.[9][10] In May, several new clips were posted, including another one of Endless Summer, another one for Sunset, and one for Nighthawks.[11][12][13] Also in May, a snippet of a new song presumably called She Was Dreamin' of Boys (featuring vocals by McEwan) was posted, but the song did not make the final album.[14] A small snip of the album artwork (done by Taylor Allen) was revealed in July, and at that time the release was referred to as an EP.[15] It was announced in August that the release of the EP/album was still several months away, with McEwan citing a desire to "push the envelope on the synthwave genre."[16] In September, now removed teasers of the album were uploaded to Soundcloud and Youtube.[17][18] In October, a small clip of an unknown song that did not make the album was shared.[19] In November, a clip of The Equaliser (Not Alone) was posted, and the song was slated to be released in December, but it was not actually released until March 2016, when it was featured on the Drive Radio compilation Selection Volume 1.[20][21][22]

Throughout the first half of 2016, more information about the forthcoming album continued to be shared by the band. A snippet of Crockett's Revenge was posted on social media in March,[23] and it was announced that Thomas Edinger, who played saxophone on the Days of Thunder EP, would be playing saxophone on three songs on the new album.[24] Tim McEwan also said around this time that he expected the album/EP to have around eight to ten tracks, with a few instrumentals and one or two songs with him on vocals.[25] An early clip of Memories was shared in April,[26] and McEwan stated in a Facebook comment that writing for the album was complete and the production of tracks was in progress.[27] He additionally mentioned in a separate post that the album would have a more "noir" feel compared to Days of Thunder.[28] At the beginning of May, Sunset was announced as the first official single from Endless Summer.[29] The single was officially released on May 13.[30] Later that month, McEwan said that the album was likely to be released in June, noting that the production of Sunset took longer than expected and stated further that more singles would be released in the meantime.[31] In early June, a second single Vampires was announced and was officially released on June 10.[32][33] More clips continued to be shared after the release of the two singles. A longer clip of Crockett's Revenge was shared in June,[34] and in July a snippet of The Comeback Kid was posted.[35] On July 25, the album was officially announced and given a release date of August 5.[36] The album artwork was also revealed. On August 1, the tracklist was revealed.[37] Endless Summer officially released on August 5, receiving positive reviews from critics.[38][39][40]

In 2017, electronic music label Monstercat Silk issued two singles from Endless Summer containing remixes: Sunset, which was released on August 7,[41] and Synthetic, which released on December 18.[42] These singles lead to the eventual release of the band's first remix album, The Midnight Remixed.

Endless Summer contains the song Synthetic, which until the 2021 5 Year Anniversary Edition reissue was the only released The Midnight song with vocals written and sung by band member Tim McEwan. The album also features the band's first collaboration with Los Angeles based singer-songwriter Nikki Flores on the track Jason. The band would later collaborate with Flores again on the songs Light Years and Because The Night, and she has also toured with the band several times. McEwan said that the album's title was derived from a 1966 surf documentary film he watched titled The Endless Summer, stating that it gave him "this yearning for summer never to end."[43] He suggested this name to Tyler Lyle and encouraged him to use it as a basis for lyrics for a track idea he had, which resulted in the song Endless Summer and the album being given the title as well.

The instrumental version of Endless Summer was released on August 13, 2016.[44]

On June 24, 2021, a 5 Year Anniversary Edition reissue of Endless Summer was released, containing two additional songs: Comet and Bend.[45] Bend was originally released as a bonus track for pre-ordering the first pressing of the Endless Summer vinyl release. Comet is a song that was teased on the band's Facebook page back in 2016 but had been otherwise unreleased.[46] It is the second song to release by The Midnight with vocals from Tim McEwan, following Synthetic.