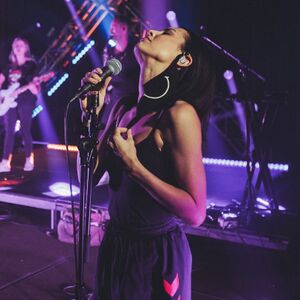 Nikki Flores during rehersals for The Midnight Onlline

Nikki Flores (born Brandi Nichole Flores, October 17, 1988)[1][2] is an American singer, songwriter, and producer based in Los Angeles, California. She has an extensive catalog of credits as a singer and songwriter.

After a full album failed to materialize on either label, Flores began a career of writing songs for other artists and making appearances as a featured vocalist. She has written for artists such as Christina Aguilera, Jordin Sparks, Nas, and JoJo.[3][1] Flores has provided backing vocals for the likes of Keyshia Cole, Demi Lovato, and Cher Lloyd. In 2016, she released a six-track EP titled XII XV.[8] She has also collaborated several times with German DJ Markus Schulz as a writer and vocalist.

Her first collaboration with The Midnight was the song Jason from the album Endless Summer. She co-wrote the track and provided vocals. Flores worked with the band again on their following release Nocturnal, co-writing and singing vocals on the song Light Years. Her most recent collaboration with The Midnight was the song Because The Night from their 2020 EP Horror Show, a cover of the 1978 song by Patti Smith. She also provided background vocals on the song Good in Red. Flores has performed live with the band on several occasions, most recently during the 2020 concert special The Midnight Online. She sings vocals for the songs that she was featured in and also sings vocals on the song Sunset.

Contributions to songs by The Midnight[edit | edit source]