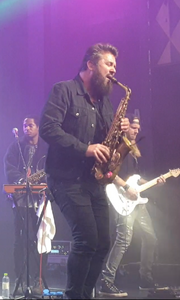 Thomas Edinger performing with The Midnight in 2019

Thomas Edinger (born 1976 in Denmark)[1] is a Danish musician and multi-instrumentalist, best known for playing the saxophone. He has played the saxophone on most of the studio versions of songs by The Midnight and has occasionally performed with them live. According to Tim McEwan, most of the saxophone parts are written in advance for Edinger to perform, however, some of the solos were improvised by Edinger.

Edinger started playing the saxophone at the age of 13, and after a few years received Bikubens Talentpris (now known as the Reumert Prize), a talent prize founded by the former Danish bank Bikuben.

Contributions to songs by The Midnight[edit | edit source]