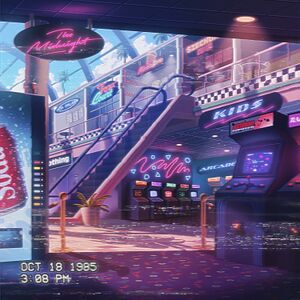 Kids is the third album from The Midnight. It was released independently by the band on September 21, 2018.[1] The instrumental version of the album was released on October 30, 2018.[2]

The Midnight's previous album Nocturnal featured a distinctive dark, noir sound. For the next album, Tim McEwan expressed a desire to move away from this sound and create music that was more upbeat and happy, but still had some hints of sadness.[6] Inspired by the television show Stranger Things and the idea of living in the memories of childhood, McEwan called Tyler Lyle the day after the release of Nocturnal and shared this vision with him. Lyle was receptive to the idea, and thus the process of creating Kids began.

One of the first public mentions of a new release came during a November 2017 interview with Vehlinggo shortly after the release of Nocturnal. McEwan revealed that a new and more "summer feeling" EP was in development and that it was planned to be released in the spring or summer of 2018.[7] Giving an early hint at the theme, he stated, “I like to think about it as what the kids from Stranger Things are listening to when they’re not chasing monsters.” The band said on social media in March 2018 that the next album would be "dedicated to the disaffected youth."[8] In May, more info about the new album's direction and theme were shared, with the band stating the "the opening track on our next album is gonna hit you right in the feels" and that it would be their most ambitious album to date - the most challenging so far for McEwan as a producer.[9] They also said that "A lot of the tracks on our new album are dedicated to late nights on the Internet."[10]

On July 2, 2018, it was announced on the band's social media that a new single was imminent.[11] On July 6, a small snippet of the single's artwork was shown and a release date of July 13 was given.[12] The next day, the single was confirmed to be Lost Boy[13] and the full artwork was revealed on July 11.[14] On July 28, another single was teased.[15] On August 1, the second single was revealed to be America 2 and was slated for an August 3 release.[16] More songs were hinted at on August 11, [17] and on August 16 Kids was officially revealed with a video trailer.[18] The trailer played a small snippet from Kids (Reprise) and gave a release date of September 21 for the album. On September 5, Arcade Dreams was announced as the third and final single from Kids and was released on September 7.[19]

Kids was officially released on September 21, 2018.[20] Despite receiving more mixed reviews compared to previous The Midnight releases,[21][22][23][24][25] Kids was a successful release for the band commercially, debuting at number one on the Billboard Dance/Electronic Album Sales chart with week one sales of 2000 copies.[26] It also charted at number twelve on the Dance/Electronic Albums chart, number two on the Heatseekers Albums chart, and number thirteen on the Independent Albums chart.[27]

The title Kids was suggested early in development by McEwan, with Lyle also approving of the name. At the time, he and his wife Anna were expecting their first child.[28] The first song created for Kids was Lost Boy, an old track of The Midnight's that had been written back in 2015 with Finnish DJ Lenno Linjama.[29] The song was originally titled In The Dark and had a more house feel compared to the final version. Although the band liked the track, they felt it wouldn't have fit well on Nocturnal and held the song out for a future release instead. Deciding to use the song for Kids, McEwan took the original demo and rebuilt the song, doubling the tempo and running the melody and beats in half-time. In the words of McEwan, Lost Boy would be a table-setter for the rest of Kids, which the band considers to be their first "theme" album.[30] The album was originally planned to be longer with more tracks, but it was decided to shorten the release to reduce Lyle's workload while he was caring for his newborn son.[31] The band eventually decided to make Kids a trilogy, with the following album Monsters being the sequel to Kids and the trilogy closing with a yet to be named album.

The artwork for Kids was designed by Aaron Campbell, who also designed all the artwork for the album's singles as well.[32] The date on the album art for Kids, October 18, 1985, is a reference to the North American launch of the Nintendo Entertainment System.