This article is about the EP. For the song, see Days of Thunder (song). 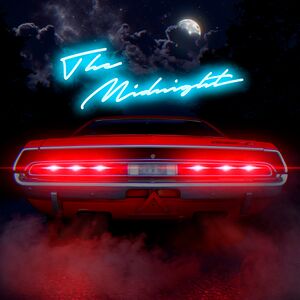 Days of Thunder is the debut extended play (EP) from The Midnight. It was released independently by the band on July 15, 2014.[1] The instrumental version of the EP was released on March 20, 2016.[2] No singles from Days of Thunder were released prior to the EP's release, but in 2016 the label Monstercat Silk issued singles for the songs WeMoveForward and Days of Thunder.[3][4] The singles included the original songs and remixes that would later appear on the 2017 remix album The Midnight Remixed.[5]

Tim McEwan and Tyler Lyle met in 2012 at a songwriter's workshop in North Hollywood organized by Katie Donovan, Lyle’s A&R representative at the time.[6] Prior to meeting, McEwan had listened to some of Lyle’s previous work and liked Lyle’s folk sound. They bonded over a mutual love of 80s rock and after initially struggling to define their sound, decided to enter the synthwave genre at the suggestion of McEwan. McEwan had prior exposure to the burgeoning synthwave genre and was inspired by the movie Drive. The first song they wrote as a duo was WeMoveForward,[6][7] and the same day they also wrote the chorus for Gloria.[8] Over the next two years, they continued writing and recording songs, leading to the release of Days of Thunder.

The band's sound and philosophy were self-described as follows:[1]

There is a Japanese term: Mono no aware. It means basically, the sad beauty of seeing time pass - the aching awareness of impermanence. These are the days that we will return to one day in the future only in memories. How do we capture them? How could we possibly be able to fully appreciate them in the present? This project is our attempt to put time under glass. The Midnight is a marriage between a songwriter from the Deep South and a producer from Denmark who both live in Los Angeles. The songs were written in North Hollywood and Santa Monica over two years and represent the first fruit of The Midnight. This is our love song to our city and a testament to the weight these years can hold.